Decade in the sun.

As of May, I’ll have been writing about games for ten years. Last year, I celebrated five years as a proper specialist writer.

Its been so long since I started (just before E3 2005, I think) yet its only recently in the past few years its all happened going specialist. But it was a decade ago around this time I decided I wanted to write about games for a living and a few months later when I started doing it.

As I mentioned a few weeks back, it was because of Metal Gear Solid 3 that kind of gave me the push to possibly think about writing of games and then I went ahead and started a Freewebs site a few months later, after reading a lot more Official PlayStation 2 Magazine than I was previously and getting into online stuff including and especially Eurogamer, where I wrote about games (very, very poorly it must be – both generally and from a grammar standpoint).

Admittedly, from 2005 through to 2007, no one ever read what I wrote from a bunch of reasons. In fact, I did liveblogs of the Sony, Microsoft and Nintendo press conferences at E3 2007 even though no one would read them. But I did them anyways because I wanted to (and why the fuck not, even if no-one was reading, it was good practice).

And then, GOONL!NE, perhaps the biggest of the enthusiast ventures I created. Thanks to N4G and Twitter starting to emerge around that time, the site was getting noticed more and more and more. People were actually reading words I was writing. That was exciting And then sooner down the line, words on the site from other people. Other people who would go on to bigger things in the industry, like Martin Gaston or Jen Allen.

There was also a heavy influence on GOONL!NE too from a site that I would later join and call home for three years, all because of a lucky break (and perhaps an email I sent just before GDC 2009): VG247. I knew even at GOONL!NE, I knew I wanted most of my focus on there would be news. If I did anything else, that’d be gravy.

I didn’t think nearly two years after creating GO, I would go on to be UK News Editor for a place in VG247 where a ton more people would get to read my words. Me, a mere contributor who was only hired for gamescom work initially.

And since then, I’ve written elsewhere. Official PlayStation and Xbox Magazines, Polygon, etc. And then achieving the mightiest of dreams in June 2013 when an article I wrote appeared on Eurogamer. I can not begin to tell you the emotions I felt the day they accepted my pitch and then when it appeared. This was why I wanted to write about games, to appear on Eurogamer and in Official PlayStation Magazine.

Ten years later since I started out, I’ve done that. I’ve appeared in two outlets, later to become three, that my 14-year old self in now in a corner somewhere sobbing his eyes out at pure astonishment. How a kid in Derry, Northern Ireland managed to write words about videogames that weren’t rubbish (half the time) and how he didn’t see it more as a job, but as actual fun.

Not in a million years did I think I would be interviewing some of the most famous and incredible people in the industry, nor would I think I would be able to sit down numerous times with reps from who I now consider to be my favourite developer who would eventually make my favourite game (*insert podcast plug here*) and be able to chat with them about it (even if it was just half an hour), two of whom were part of the core team of four on one of my other favourite games ever.

Nor would I in my wildest dreams get to call some of the people I looked up to ten years ago, as well as other fantastic people, amazing friends.

There’s too the other things. I’ve always wanted to do a cover feature of sorts for a magazine after reading so much of OPM and PlayStation World (RIP) growing up. You could argue that, technically, I already did in the form of the Issue 100 cover for OPM last August, but A): that was a subs-only cover. And B): that could be split three ways – its number one placing in the Best PlayStation Game of All Time vote by readers, my six-pager on the game with Neil Druckmann and the review Dave Meikleham had for Remastered. I’d love to do a cover in which I do most of the legwork on it that I could truly call mine.

(Also, fun fact – the other day I had a dream I was running a magazine with a few games folks, but it wasn’t specifically about games, I think. Odd)

How I would love to get an hour, maybe even 90 minutes, to talk to Neil Druckmann and Bruce Straley and have a proper, in-depth discussion on The Last of Us beyond a mere half-hour like I did last year. Or how, and maybe somewhat miraculously, have a similar, in-depth roundtable talk on Uncharted 2 as part of a retrospective with Amy Hennig and Richard Lemarchand plus Straley and Druckmann.

And of course, there’s The Masterplan. That silly little thing in my head that I’ve talked about on here before and on Twitter. I’ve always openly mentioned moving to England about writing games. But there are things, specific things, tied to The Masterplan that I want for me so, so bad. I never want to talk about them publicly because I’m a bit superstitious. And even then, I think as a whole, only two people in the industry (three if you count my sister) specifically know what The Masterplan entails. But believe me when I say I absolutely want the specifics of The Masterplan. And I want them this year.

Here’s hoping I get them. 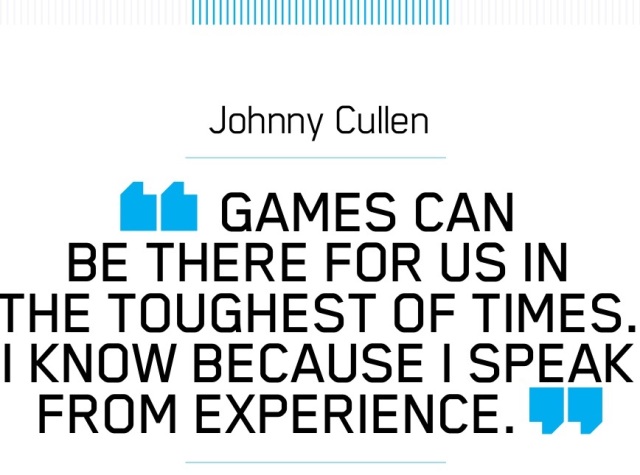 The reason why I write all of this is because I was always going to write something on writing for the past ten years at somepoint. But the reason why specifically now today than perhaps May when I hit the ten-year marker is because something happened yesterday that, after a decade, everything I’ve done absolutely feels vindicated.

Recently, I did an op-ed for Official PlayStation Magazine on my mum’s passing last November that appeared in their latest issue on how games help people get through really difficult periods, like with what happened to me. And I’ve had so many people comment on it or message me about it on Facebook, Twitter, Instagram, etc. And that feels pretty damn gratifying in itself.

And especially after seeing the reaction my mum had to the piece I wrote about The Last of Us for OPM , my last huge memory of her whilst she was still around before she died, that in itself felt like vindication, that she finally accepted the profession I was so happy to be in, if not already. But this sealed it.

Without going into too many specifics (because I don’t know how much I can reveal for various reasons), yesterday, I got a message featuring numerous ‘outside feedback’ to my article. And I got an insight as to how my piece resonated with them as part of their feedback. Seriously, this kind of feedback meant everything reading it back. That these past ten years paid off. That sticking with it, when I looked like I was going to quit so early on (only for someone to tell me to hang in there), paid off big time.

To those people who sent that feedback and how the OPM op-ed resonated with them, thank you for reading and thank you for sharing your stories. I can’t begin to tell you how grateful I am to you for just reading my words, let alone move you in a certain way.

To the people who let me write silly words for these past few years – Pat Garratt, Brian Crecente, Ben Wilson, Alex Carroll, Leon Hurley, Martin Robinson, Tom Bramwell, Jonty Hicks, Matt Martin, Matthew Pellett – thank you so fucking much for overlooking my shite pitches (because I am massively shit at pitching, believe it or not) and letting me write things for you.

And to anyone and everyone who’s reading this and who’ve ever read word one of anything I have ever written – be it some news story or a feature I wrote up – on Eurogamer, VG247, Official PlayStation Magazine, Official Xbox Magazine, Polygon, TheSixthAxis, RPG Site, GOONL!NE, etc, thank you so much. I will never, ever be able to properly express how grateful I am that after ten years of writing about games, people read the things I write, whether they love them or hate them.

(Yes, this is massively self-indulgent and I don’t give a FLYING FUCK. Kisses! xoxo)