[SPOILER ALERT: This will go deep into spoiler territory from start to finish, so if you haven’t played episode two yet, close the tab now. Otherwise, you read at your own risk. I’ve also posted a non-commentary runthrough of the episode in question, my first time going through it, as a Cullen Plays. Needless to say, after episode two, all episodes will have a commentary going forward.]

[WARNING: This will also discuss suicide and potential sexual assault]

I wish I could say I saved Kate Marsh. I wish I could, I wish I could. But I didn’t. And even now, just shy of a day since it happened, it’s still swirling in my head. I was doing everything right, it seemed like maybe I could get her to come down. And then I made a remark about her mother and how she would miss her if she jumped. Ironically, that was the straw that broke the camel’s back.

By this point, the game had forced you into a position where if you say even the most errant of things, done things that will come back to you in a big way, not even the rewind mechanic – which by that point was being used to its limit in that portion of the episode – could save Kate.

One slip of the tongue. That’s all it took. And she was gone.

How Life is Strange handles the moment and getting there is quite honestly incredible. As you start the episode, you run into Kate, who has been bullied by Victoria and her gang of cronies as well as effectively slut shamed following the release of a viral video she appears in. She asks for your help in finding out the truth to events that took place after the video in which she says she was drugged and implies she may have been sexually assaulted.

It’s obvious that Nathan Prescott was already behind the events of it – he was the one who said he’d take her to the hospital after all – but it’s not like we can immediately jump straight to it without concrete evidence. However, as I said, it feels obvious considering who we’re dealing with that it is Nathan. It’s where the first major decision in the episode really makes you think. Wait for more evidence or tell her to report everything she just told me to the police? I really struggled with this one.

I told her to go to the police in what was most likely a heart over head decision. Even now as of writing this, I’m still not sure whether it was the right decision or not. Sometimes I’m swaying between yes before swaying to ‘I’m not sure it was’. I don’t know if I have the right words to perfectly describe it, but this was a really loaded choice with both pros and cons for both answers. Dontnod handled this with care.

Sgt Pepper Dickhead David Madsen is king of the assholes. After getting back to school after what was a dramatic day out with Chloe, I see him and decide to, for some ungodly reason, talk to him. To recap from episode one: David is harrassing Kate, being a massive shithead to Chloe to the point I’ve taken the wrap for her joints and – to be frank – being a massive dickhead to Max overall.

So in talking to him in episode two, it felt like there was maybe a method to David’s madness, lets say. Sure, he was still a creep and sure, he still came across as a bit of a dick. But what he was saying to me regarding Chloe was assured to an extent. And he was right, I didn’t have all the evidence as to why he was questioning Kate, extreme as he was to her. As much of a shithead as he was last episode, what he was saying to Max resonated on some level. As I said, maybe there was a method to the madness.

Fuck the method, it was straight madness. After Kate’s suicide, he sold me down the river and accused me of selling cannibis. In what was another head/heart moment – albeit, the former winning out this time and a bit of sense to it after accusing Nathan first time round without any sound evidence and the threat of suspension looming over me from Blackwall – I sold David out in return with the evidence to back me up. Nathan will get his. But in time. I’m a strong believer in karma, after all. For now, David got his. No regrets.

Which brings us back to that emotionally charged roof sequence with Kate and the events leading up to it. In my ‘playtime’ with Chloe from the diner to the tipyard to the train tracks, it felt like she – and the game – was giving me the impression I was this all-round amazing badass superhero with the ability to rewind time. And I bought into it – hook, line, sinker.

So imagine the left-fielder of what was happening with Kate. I felt helpless as I saw this person who earlier I was trying to help considering the really horrid stuff that happened to her. Bullied by Victoria in the shower room, a viral video that effectively slut shamed her and the implication she was drugged and perhaps more.

As you see her on top of the girl’s dorm, the obvious instinct is to use your power to get to her in time instead of seeing her fall. Just before the entire segment with Kate, you see Chloe stuck on the rail tracks. You’re rushing around trying to figure out how to get her unstuck where if you don’t make it in time, the game freezes in stasis just as the train hits Chloe. You can use rewind as many times as you like to save her if you make a mistake or you’re too slow.

But it’s when you try to save Kate that you realise your power is now starting to have a serious effect on you to the point that your powers are now limited. It’s the most inopportune time for your powers to go awry, but you have just enough in you to not only rewind time, but freeze it to get to the roof.

I felt like I’d done everything in my power to save Kate. Could I have intervened for her when she was shouted down by David in the last episode? Perhaps. And she chewed me out for it when I saw her in the shower room at the start of the episode (which now as I’m writing this makes me realise taking the photo and not defending Kate very selfish in hindsight – a lot more so given the events after what would happen).

But I thought I’d done enough to save her. Here she was, her entire world crumbling at her feet and the will to live all but gone. I encouraged her to go to the police, I talked with her on the phone to the annoyance of Chloe, I believed in Kate so much. What was happening was out of character for her. But I thought I had just done enough as “Maxwell Silver Hammer” (there was a few Beatles references scattered in episode two) to get her to come down and be the superhero I was told I could be.

No. I didn’t. All it took was just one foul slip of the tongue. And there was no rewind this time. There was nothing I could do.

The game built me up. And then, just as quickly, it tore me down asunder.

Life is Strange’s second episode has flaws. It still has its lip-sync issues, there’s one or two bits of dialogue that still feel cheesy and there is a bit in the junkyard where you have to find a collectable that is hidden with hints to the location not well explained.

But for the sum of its parts, it’s the most intense game I’ve also played in a long while. I’d even go as far as to say it is one of the best standalone episodes we’ve ever seen in terms of episodic gaming – up there with the third episode of the first season of Telltale’s The Walking Dead – and a prime example of how evolved the genre has gotten.

I’m really hopeful for Dontnod and the future episodes they make, but also worried that later down the line, it could just as easily go down the drain.

Because the truth is with three episodes to go, even with its flaws, if they keep going the way the past two episodes have gone, they could potentially have something special on their hands. 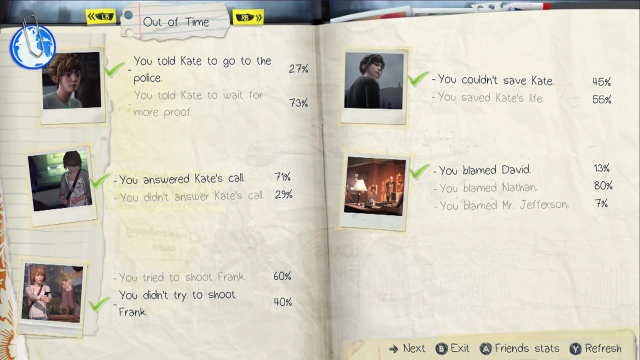 Disclosure: This is based on a final Xbox One digital copy of the second episode of Life is Strange, provided by Square Enix. Life is Strange is out now on PlayStation 4, Xbox One, PlayStation 3, Xbox 360 and PC via PlayStation Store, Xbox Live and Steam with subsequent episodes coming later this year.