This is going to happen.

So much for a hiatus. 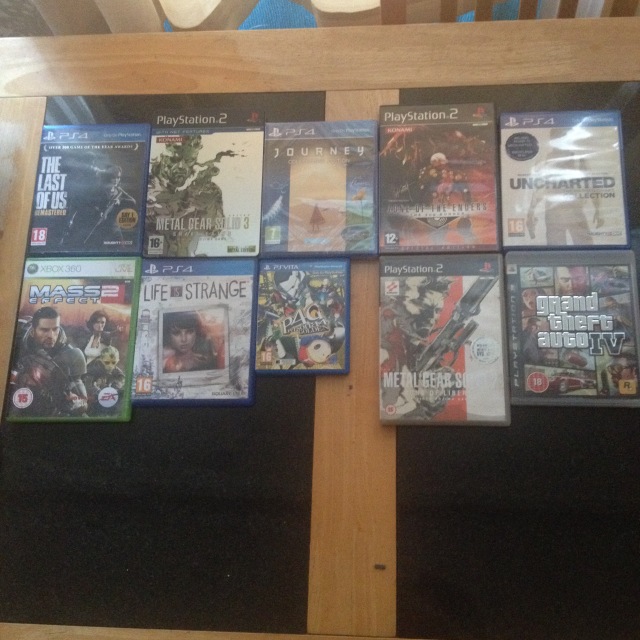 A few days ago, I finally got round to finishing off the physical collection of my top ten by finally picking up a hard copy of Persona 4: Golden (bought it digitally originally) and Journey (originally a digital only game).

It’ll be interesting to do this challenge with some games considering there’ll be a few I’ve not played in a few years. I’ve not played Mass Effect 2 in at least two years, Zone of the Enders 2 in three years. Nor have I touched both TLOU and MGS3 in two years since the GamesAid 24-hour stream/the passing of my mum respectively. Chances are the latter will perhaps have the biggest emotional punch when I finish it again considering how it helped me through the hardest period of my life.

For the sake of convenience, I’ll be playing each game in their modern incarnation instead of the original, so I’ll be playing, say, Zone of the Enders 2, MGS2/3, TLOU and Uncharted 2 among others in their HD collections/versions on PlayStation 3/4 respectively.

But there’s also a two-fold reason why I’m doing this. As well as just to check in with this list, at somepoint in the year, there’s an intent to do my own episode of My Favourite Game. Just to get it out of the way. Because at somepoint, it will end up happening. So may as well get it out of the way now.  Don’t worry, there will be someone else to sit in the presenting chair in lieu of me in it and I just want to have these games fresh in my memory as I talk of them again as my favourite games ever.

I don’t know when specifically I’ll be starting the challenge, but it’s one I want to do. It’s good to revisit this every now and then and just to make sure these are worthy games on my list.

I think I’m going to enjoy doing this.